Tales of the Deep Forest: The Little Brown Animal by DiMari Bailey

Hi there!
Welcome to Satisfaction for Insatiable Readers. 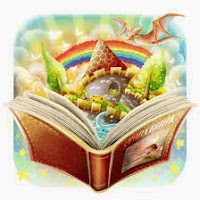 It's another weekend here on the site, but that doesn't mean the reading stops...if anything, it moves forward in leaps and bounds!  Now, this post is usually seen on a Saturday but we were busy celebrating a cover reveal so this week we'll have Storybook Sunday.  Sound good?  I thought you might be agreeable.  Anywho...

Today, we're shining the spotlight on a Children's title that's the first in a planned series entitled, Tales of the Deep Forest.  It stars an adorable little animal that thinks less than highly of himself and the transformative path his life takes once he lends an ear to really listen to his surroundings.  Ready or not, here comes today's book of choice... 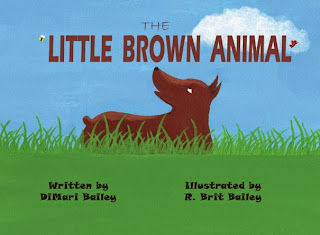 As I said, the star is (as the title implies) a little brown animal.  Drawing wise, he reminds me of my dachshund Winston (may he rest in peace).  He has short little legs, little brown ears, and a short stumpy tail...okay, so maybe not the tail, but he sounds SO CUTE!  Why he ever wished to be something else to be more beautiful was beyond me...but then again, that's one of many points.  Take it as the whole "BE YOURSELF" message you've heard time and again, only this time, it's literal and with an unexpected ending you won't see coming.  Along the way, our little guy discovers that he's never truly alone because there is life all around him in the forest, and those lives all have stories to share if only someone would listen.  Listen he does and before long he is sharing his new found tales with all the animals he so longingly wished to be, becoming a part of something he never truly felt he could be a part of.  It's enough to bring a tear to your eye seeing him come into his own, though there is plenty of curiosity and wonder to spark the imaginations of wee ones along for the reading journey.

I'd be remiss if I didn't spend some time on the illustrations seeing as how the story is told just as much through them as the words on the pages.  From the moment we meet our sweet little brown friend to the final transformation (nope...not telling!), you'll be delighted to see his cuteness grace the pages.  You'll sadden as he gazes at the animals he wishes to be but explode with delight as he discovers those that make him feel happiness down to his toes.  As he ages, you'll chuckle at the draw and appeal he has garnered with the other forest animals throughout the years and when his life path is finally revealed, you won't be able to contain your smile.  The pictures may be simple in design and lack the details that others bring, but it fits with the story and works its magic all the same.

In conclusion, the first of a new Children's series all about the "transformative power of faith and humility" that lets its true colors show.  I can honestly see this becoming a fast favorite for those kiddos with growing imaginations and the lessons it imparts will go with them as they grow.  Recommended for all ages, shapes, sizes, and colors....from the tall to the small, the purple to those little and brown. 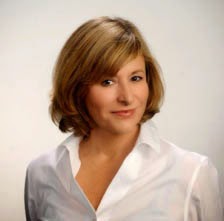 After completing her BA in History, DiMari spent many years living and working in Oslo, Norway. She worked in a bookstore, then as a buyer and marketing manager for a chain of bookstores, and an editor for a small press. In addition, DiMari worked as translator and taught ESL to adults and Norwegian as a second language to immigrant children, working closely with children and parents from Vietnam, Chile, and Turkey. Since returning to the United States, she completed a Master’s in Education and has worked in various capacities in the education industry and public schools.

The Little Brown Animal is the first story in a series called Tales of the Deep Forest. Next up is The Golden Griffin. DiMari is actively seeking books to translate from Norwegian to English as well as publishers for the translations. She is currently working with Norwegian authors Peter Normann Waage, Nina Karin Monsen, and Jørn Simen Øverli. 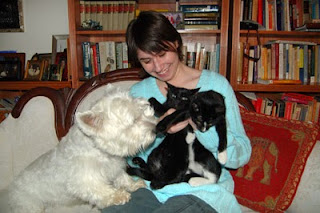 R. Brit is a US Marine currently stationed in Japan. She graduated from Berwick Academy and attended Gettysburg College, York County Community College and UMass Amherst. She is completing her degree in Linguistics online at Ashford University.

Her true gift is her art. Since the time she could hold a pencil, she started drawing dozens of pictures every day. She studied art at Berwick Academy and continues to draw and sketch and paint.

Special thanks to Penny at Author Marketing Experts, Inc. for the review copy.  (THANKS!)  For more information on this title, the publisher, or the publicists, feel free to click through the links provided above.  This title was released February 2015 via Piscataqua Press, an imprint of RiverRun Bookstore.  Stay tuned for the second book in the series entitled The Golden Griffin

one of my favorite speeches be yourself numb er 21. but truly sage advice I love a book that imparts something wise sometimes therefore I love this one