Hi there!
Welcome back to the site that aims to please the reader in you, Satisfaction for Insatiable Readers.

Today, we're jumping in to a Kid's Fiction selection with BOTH feet.  Yep.  We're not even going to look before we leap.  You know why?  Because it's filled with all sorts of odditoria that boggles the mind, defies the senses, and tantalizes the imagination.  Don't believe me?  You will after this post.  Ladies and gents, please join me on the balcony for the unveiling of today's book of choice... 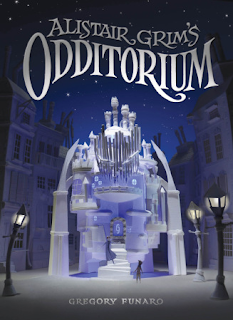 About the book...
Grubb, age twelve (or thereabouts), has never known anything beyond his miserable existence as a chimney sweep, paid only in insults and abuse by his cruel master. All of that changes the day he stows away in the coach belonging to a mysterious guest at the inn that he is tasked with cleaning. Grubb emerges from Alistair Grim’s trunk and into the wondrous world of the Odditorium. Fueled by a glowing blue energy that Grubb can only begin to understand, the Odditorium is home to countless enchanted objects and an eccentric crew that embraces Grubb as one of their own. There’s no time for Grubb to settle into his new role as apprentice to the strange, secretive Mr. Grim. When the Odditorium comes under attack, Grubb is whisked off on a perilous adventure. Only he can prevent the Odditorium’s magic from falling into evil hands—and his new family from suffering a terrible fate. Grubb knows he’s no hero. He’s just a chimney sweep. But armed with only his courage and wits, Grubb will confront the life-or-death battle he alone is destined to fight.

Where oh where to begin!
There is so much odditoria running around that...
...oh, wait a second.  You don't know what ODDITORIA is now do you?  Silly me!  Odditoria in the most basic sense of the word (the rest the characters will fill you in on the whole shebang in the story) is "any object living, inanimate, or otherwise, believed to possess magical powers".  Got it?  Alrighty then, so you see, in essence, the story is about a house (of sorts) that houses magical objects and beings (sort of)....but the real question is WHY and of course HOW!

You see, this "collection" is not just an assembly of objects or lore.  It's a GATHERING of powers, assembled by Alistair Grim himself, utilized for many purposes but with one goal....the likes of which I shall not reveal.  Oh trust me, you don't want me spoiling the surprise but that is one of MANY that's going to knock you off your feet!

From the moment we meet Grubb (spelled like the worm but with TWO b's if you were going to write it down), we enter a world both like and unlike our own.  He's an orphan child that mysteriously shows up on the Smears' doorstep one day, a gift from the Yellow Fairy, or so Mrs. Smears says.  His life is good enough I suppose, until the dear old Mrs. passes away.  You see SHE was the real caring hand here, not her hubby.  He only found value in things that served a purpose...for him; not the nicest fellow admittedly so, but I do believe some of his ill attitude was from the loss he felt deep, deep, deep, deep (you get the picture) within his heart.  The day Grubb escaped was the first day of the rest of his life...and what a life was in store!  Something WELL beyond his wildest dreams and just outside of his imagination, but he possessed enough wits and whimsy to see it through.  Good thing too because there is MAJOR DANGER ahead and lives, including his own, are at stake!

Alongside this adventurous, mysterious, and downright magical story is a cast of characters besides Grubb that are memorable indeed..for good AND bad reasons.  First up, the good!  We've Mrs. Pinch (pictured above), Broom (self explanatory and yet not), Nigel (a great man to have by your side, but not exactly whom he seems to be), Mack (if you can't love a talking pocket watch with attitude, who can you!), Cleona (LOVE her character!  So full of heart and mischief, but the good kind!), Gwendolyn (the Yellow Fairy...but if you're thinking Tinkerbell, THINK AGAIN!  Chomp chomp!), and of course Alistair Grim himself, but he's more of a borderline character that keeps you guessing as to his real purposes and drives.  On the flip side of things, we have Prince Nightshade (~shudders~), the Black Fairy (~double shudder~),  and all assortments of sirens, trolls, ecetera that threw their lots in to make a new world.  *cue disaster music...for all parties*  There's loads of mystery surrounding each of them and all manner of situations to be had with them in tow. 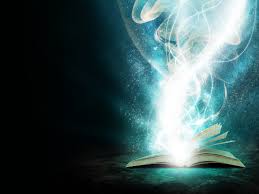 Overall, I was quite enamored with the tale.  After all, how can you not love a kid named Grubb thrown into circumstances WELL beyond his control with no history to call his own but a heart of gold that shines like a ray of sunshine in the darkest day?  There's something for everyone from the moment you spy the cover (and what a cover it is!) to the moment the BIG SECRET is revealed that...oh, wait a second.  You almost had me there.  Did Cleona put you up to that?  CLEONA!  That's not funny!  I almost spoiled the ending!

Recommended read for middle grade readers and beyond. 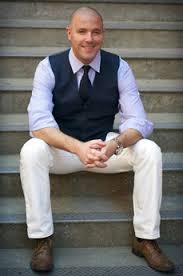 Gregory Funaro grew up in Cranston, Rhode Island, and wrote his first story, The Ghost in the Window, in the fourth grade. He considers this to be his finest work, but unfortunately it has been lost to time. Following high school Greg majored in theatre at the University of New Hampshire, and after various acting gigs, received his AM in Theatre Arts from Brown University and an MFA in Acting from the FSU/Asolo Conservatory. Greg teaches drama at East Carolina University, and is busy working on the next book in the Odditorium series.

Special thanks to author Greg Funaro for the signed review copy.  (THANKS!!)  For more information on this title, the author, the series, or the publisher, feel free to click through the links provided above.  This title released at the beginning of this year via Disney Hyperion, so be on the lookout for it on a bookstore shelf or virtual retailer of your choosing.  ALSO, book 2 in the series will be releasing soon, so safe a spot on your "to read" list!  Here's a peek at the cover... 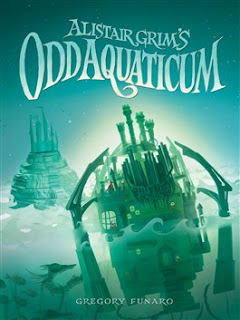 How very spellbinding and most unusual. This book has to be a most read on everyone's list. I read the wonderful review and immediately wanted to possess this book or let it possess me