Hi guys!
Welcome back to Satisfaction for Insatiable Readers, the place that knows the best way to start AND end a week is between the pages.

Today, we're shining the spotlight on the THIRD book in a Middle Grade Science Fiction series.  It's garnered a lot of attention so far, and from what I've read in this installment, it's got the potential to keep readers coming back for more straight through the end (FIVE books people, it's five books long!).  Grab your anti-gravity gloves and stick close to each other, it's going to be a bumpy ride.  Today's ebook of choice is... 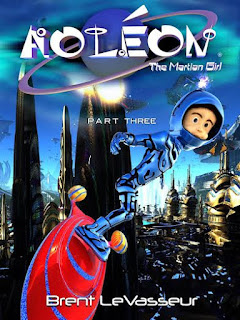 About the book...
Aoléon and Gilbert investigate the Luminon to try and uncover the plot to invade Earth to steal it’s milk cows. In the process, they discover a disturbing revelation about the Martian leader. After overhearing the Luminon discuss his plans to use sabotage to disrupt Mars’s galact supply, the duo races to try and to warn Aoléon’s father Deimos, who is a manager at the galactworks plant before the saboteur can act. Meanwhile, Aoleon has to take her pilots exam, which would enable her to eventually join the Martian intergalactic explorational fleet. However, during the test-run, something goes horribly wrong. The two are put in a life threatening situation that only Bizwat, a Procyon commando, and Aoléon’s friend can save them from. Gilbert finally gets his chance to learn to skyboard. However, things go horribly wrong and they are chased by the Royal Paladin guard. Will they survive?


Okay, so to recap...
...Aoleon came to earth for a little joy riding and crop circle making, ended up leaving in a grandiose chase scene with an "export" she didn't initially count on by the name of Gilbert.  Over time, they've become great friends, even as they figure out how they fit into the bigger scheme of things, namely the resistance led my the mysterious and hard to locate leader, Pax.  Caught up?  You're sure?  Okay, then, let's move forward.

This installment puts us right back in the range of fire.  This time we learn that school nemesis's may be hiding more than we bargained for, the leader of the Mars colony is not what he seems, and the man in the moon is far from a figment of one's imagination...and is better said to be "men" as in plural times thousands (well, they aren't really men but you get what I mean).  There's shocking moments in the ventilation with a spider like robot.  There's a game of chicken played at over a thousand feet in the air without a net against Paladian guards (eep!).  There's a rescue attempt by Bizwatt, the undercover fella from the last book, and a BIG BOOM as a result.   All that and more occur, while we're still trying to unravel the bigger picture to see just how all the pieces will fall.  It's quite the ride with the right amount of action and mystery to keep you coming back for more.

While the story was certainly actions packed, I must say my eyes were more captivated by the illustrations than before.  The colors are just so vibrant, matching the out-of-this-world vibe of the story, and though only 2D, they manage to capture the action of the moment depicted to a tee.  Even the head, err...eye shot of Zook up there (that's Aoleon's pet) manages to translate his exuberance for the task he's been saddled with.  (~whispers~ It's an important one too!  If he isn't successful, the whole galact plant could just up and POOF!)  So you see, if that can be seen from this partial pic, imagine what you'll get from a full page color image of the Mars city, or the moon that Pax is directing them to investigate for some reason or another (a BIG reason as it turns out), or the chase scene when Aoleon and Gilbert are trying to outrun a few Paladian guards (those two have some mad space boarding skills!).

All in all, though we're delving into deeper space than I usually care to investigate, I'm still invested in the read and want to know how the series draws to a conclusion.  Two more books and I'm so there!  Will they figure out how to expose the powers that be behind the planned attacks and stop the invasion?  Or will they be captured and meet a dire final end?  Only one way to find out....