Well, we've made it through another week and had many grand adventures through the pages.  Time to call it a week and PAR-TAY through the weekend...and by party of course I mean READ.  ^-^  Today, we're going back to the Kids Fiction genre, more specifically a Sci-fi Middle Grade series that we've been working our way through together.  The end is near, but only just, for today's selection is only book four and there are FIVE in this series...hence the only just...but that doesn't make it any less exciting.  Ladies and gents, children of all ages and species, get ready to blast off on another spacey adventure!  Today's book of choice is... 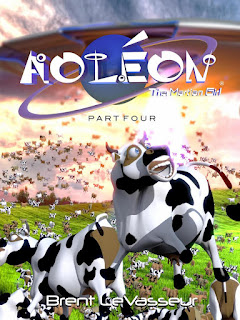 About the book...
Aoléon and Gilbert have become the Luminon’s top priority in stopping the Martian resistance movement, and after being chased by the Royal Paladin Guard, they are forced to flee the Martian Megalopolis. Aoléon, Gilbert and Zoot escape with the help of Bizwat and his newly found friend, Helios, a first generation soldierbot.

After their saucer is destroyed, they crash land somewhere in the deep Martian desert, and they set out to locate Kyrios and the secret base where Aoléon’s parents are being held captive.

After battling the forces of nature, starvation, a Klyklon dust storm, (and not to mention a giant slor that almost swallows them alive), they finally make it to their destination. However, after Kyrios gives Gilbert some basic training to develop his budding psionic power, they learn that their journey is far from over.

Will Aoléon, Glbert, Bizwat, Helios, and Zoot be able to rescue Aoléon’s parents and stop the Martian invasion of Earth in time?

First things first, that cover!
I love the look on the face of the cow, or rather cows as in plural because it's not just one bovine flying through the air like an acrobat without a net.  As funny as the expressions are though, you know they can't help it. I mean, YOU'D have a similar facial displacement if you all of a sudden were being abducted while minding your own business in the middle of a field.  Gosh...how RUDE!

Secondly, we've still got to talk about those illustrations because as creatively fun as the cover is, the full cover vividness carries over to the interior spreads as well.  There didn't seem to be as many this time around (could have just been my impression though) but that didn't make them any less impact making.  Most memorable to me?  The sand-eel.  *shudders*  Think of the old Beetlejuice cartoon and the sandworms...only more vicious.  *o*


Third times the charm, or rather next on my list of things to mention is the story itself.  Aoleon, Gilbert, and Bizwat (and Zoot!) are back and running for their lives as the powers that be pursue them to the ends of the galaxy.  Okay, so they SHOULD be running for their lives but in actuality they are headed right into the danger zone as they try to rescue Aoleon's family...and then try to stop the invasion of Earth.  Gadzooks!  Do they have it in them to face the dangers ahead?  Will this band of little rebels be able to see it through?  With the strength they find in themselves, and each other, they are surely on their way.  The newest addition to their group is Helios, a first generation soldierbot with a sense of humor.  No, he wasn't programmed that way and yet he is the way he is.  No doubt he will garner a following of fans all his own.

So, in conclusion, we've survived another trip to the far reaches of the galaxy with laughs, gasps, and danger most unpleasant.  The writing is consistent as is the world building, so those that take delight from the science fiction details will have much to celebrate.  As for me, I'm on the edge of my seat to see how it all winds down because there's only one book left and with the way things are right now, it's bound to be a doozy!

Special thanks to Laura at iRead Book Tours for the chance to bring this series to you as well as the eBook for review.  (THANKS!)  ﻿Be sure to check out all the other stops along this MASSIVE tour as the series makes its way through the blogosphere...including one more stop over right here with yours truly as we take in the FINAL adventure.  For more information on this series, the author, this tour, or those on the horizon, feel free to click through the links provided above.  The series is available now in eBook, tree book, and audio formats, so be on the lookout for it on a bookstore shelf, or virtual retailer of your choosing.