Hi guys!
Welcome back to Satisfaction for Insatiable Readers.
Today, we're kicking off the week with the exciting conclusion to a Middle Grade Science Fiction series.  We've been featuring it over the past few weeks courtesy of iRead Book Tours, so if you missed any of the reviews, feel free to use the site search option to catch up on all the fun.  Now, this is the fifth installment and it brings everything full circle to a neat and tidy end...well, sort of.  Set your navigational systems for adventure and get ready to make star tracks because you're going to need all your wits about you if you plan on making it out in one piece!  Today's blog tour guest and ebook of choice is... 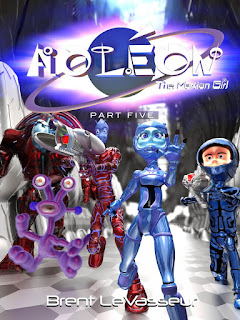 The Great Pyramid of Cydonia
Aoleon the Martian Girl, Book 5:
by
Brent LeVasseur

Aoléon, Gilbert, Bizwat, Helios, and Zoot make it to their final destination - Cydonia where Aoléon’s parents are being held captive. They infiltrate a secret underground base and are confronted by a small army of sentrybots.
Bizwat lends Aoléon and Gilbert some of his advanced combat skills via a psionic brain dump. However, this may not be enough to save them from overwhelming hostile forces that will do anything to stop them.
They finally meet Pax - the Martian who originally set them out on the mission to discover the truth about the Luminon and his plans to invade Earth. However Pax is not who he seems to be, and through a turn of events, they uncover the true power behind all that has been happening on Mars.
Will they be able to rescue Aoléon’s parents and save Earth from invasion?

The surprises in store for you in this installment are numerous but one thing is for certain, the end is coming...it's the "for whom" part that will keep you guessing.

Last time we met up with our motley crew, we were still seeking Pax, an end to the invasion/destruction of Terra, and trying to rescue Aoleon's parents, all while trying to stay two steps ahead of the Luminon.  Think they accomplished it?  Well, with a little stealth, a lot of trust in one another, and the powerhouse that is Helios, anything is possible.  There are journeys across the galaxy to take, enemies to annihilate, and friendships to remember for all time.  It's a mixed bag of emotions with plenty of action and close calls to spare. What?  You didn't think I was going to actually TELL you what happened, right?  Good!  Because I'm not, but I am going to say a few more words about the story...

This time around, we get to feast our eyes on more illustrations than ever before.  From fight scenes to stare downs to touching goodbyes (again, not telling between whom!), there's a lot going on here and it's shared in both word and image.  Aoleon has never looked cuter nor Gilbert stronger.  Bizwatt is definitely space catch worthy while Helios is full of untapped humor with Zoot close at hand to chase your worries away with a wet kiss.  Easy to spot who is who among the crew, and among the villains...just a quick note, keep an eye on that Luminon character.  You'll see what I mean.

All in all, though not a space traveling reader myself, I enjoyed this series from Terra to Mars and back.  The story was a blast (pun absolutely intended) with characters that remind us that anyone is capable of great things, no matter how big, small, or what planet they come from.  Recommended read for Middle Grade Science Fiction fans of Terra...I mean Earth, and beyond.

Special thanks to Laura at iRead Book Tours for the chance to bring this series to you as well as the eBook for review.  (THANKS!)  ﻿Be sure to check out all the other stops along this MASSIVE tour as the series makes its way through the blogosphere.  For more information on this series, the author, this tour, or those on the horizon, feel free to click through the links provided above.  The series is available now in eBook, tree book, and audio formats, so be on the lookout for it on a bookstore shelf, or virtual retailer of your choosing.