Hi there!
Welcome back to Satisfaction for Insatiable Readers.
Today, we're exploring a new twist on an old classic with medieval flavor, fire breathing﻿ foes, and a quick lesson in manners from a source readers aren't likely to forget.  Having just celebrated its BOOK BIRTHDAY this week, I thought we'd throw it a little belated party!  Are you game?  Good!  Then let's get going!  Today's book of choice is... 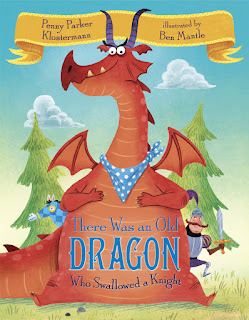 There Was an Old Dragon Who Swallowed a Knight
by
Penny Parker Klostermann
Illustrated by
Ben Mantle
978-0-385-39080-4
Random House
This is the story of one hungry dragon on a quest to feed his belly!  Only thing is, once he gets started, he has a hard time knowing when to call it quits.  He eats everything from the titled knight to a princess, a cook to a horse, and washes it all down with a MOAT no less!  Along the way, he realizes his folly and decides that enough is enough.  He returns things to the way they were (well, most things at least) leaving readers entertained AND well trained.  How so?  Ah well you see...
It is recognized rather vehemently along the way that all the carrying on the dragon is doing is quite simply NOT POLITE!  Yes, indeed.  Instead of the usual "I don't know why, I think she'll..." you know, we get a little reminder on good manners and why it's in everyone's best interest to think before acting as it is much harder to rebuild a village we've turned to ash than it is to deal with whatever is REALLY bothering us.  Kinda nifty if I do say so myself and with the colorful illustrations leading the way, you simply can't go wrong.  My favorite character?  Well aside from the dragon, I'd have to say the knight's horse.  He adds a little extra merriment with his clippity-cloppity actions throughout each scene.
Recommended read for all ages, great and small; there's enough in here for all to love.  Speaking of which, once I was done devouring the read and exploring the pictures, I hadn't quite had MY fill.  No, I wasn't following the dragons initial example or anything, I just wanted to know more and Cassie over at the publishing house was kind enough to extend the opportunity for me to explore things a little deeper.  How?  Why with an AUTHOR INTERVIEW of course!  So fair readers, I give to you our special guest of the day, author Penny Parker Klostermann...
~~~~~~~~~~~~~~~~~~~~~~~~~~~~~~~~
Author Interview:  Penny Parker Klostermann

The classic is the “old lady who swallowed a fly,” not that I ever understood why she’d swallow a fly, but that’s a discussion for another day. Tell me, where did the idea for the medieval theme of your book come from?

In this case, my desire to write my own version of “the old lady who swallowed a fly” came first. While searching for the perfect main character, I headed over to Tara Lazar’s website and opened her list of 500+ Things That Kids Like. Dragons were on that list. I thought the perfect thing for a dragon to swallow would be a knight. From there I thought of a knight’s life and what items would logically follow the knight if a dragon happened to be on a swallowing spree. I knew, too, that I wanted a twist or two. I had no idea what the twist would be, but I think my dragon knew all along. He has great pacing, and he seemed to know when readers might tire of his swallowing spree and need a change. He spoke up, and the rest of the story fell into place.

I gotta say, I love the change you made from the slightly morbid theme (“I guess she’ll die”) to the more manner-driven message repeated throughout the story. The question begs to be asked, though . . . why not follow the same lines as before? Was it merely a creative exercise, or the desire to bring things to a happier end?

I’m so glad you love the change I made. I would say it started as a creative exercise. When I set out to write my manuscript, I kept in mind that there are many versions of “the old lady who swallowed a fly.” I knew if I wanted mine to stand out from the crowd, I would need to make it fresh and unique. I carefully strayed from the same lines to work in a twist or two while keeping the flavor of the original cumulative tale. 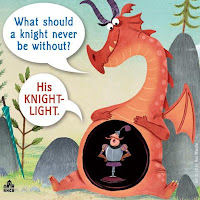 Speaking of “the end,” I must tell you, I wasn’t expecting what was delivered . . . in a GOOD way! Was this how you always intended to draw things to a close, or did it change along the way?
I have to admit that I wasn’t sure what the ending would be until I was about three-fourths of the way through the first draft. When I had him swallow the moat, it just came to me . . . what if the old dragon realized he’d gotten carried away and that one “good” knight was all he needed to be satisfied? I found humor in that, and so that gave me my twist and my happier ending.

Curious minds want to know . . . if you weren’t an author, what would you choose to be?
That’s a great question. Being an author is my second career. My first career was teaching. If I were to have a third career, I would love to be on a team that brainstorms and invents toys. Years ago I actually wrote down some ideas for toys but never took it any further. I think since I was a physical education teacher for the bulk of my twenty-six-year teaching career, inventing toys for play and exercise would be a nice fit for me. 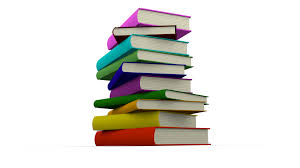 Last but not least, what have you learned along your path to publication that you wish you knew at the start?
Oh goodness. That’s a tough question because I knew nothing when I started except that I wanted to get published. I guess my best answer would be that each stage of development as a writer is necessary and important. There is no shortcut. I had to immerse myself in picture books. I wrote first drafts and moved forward by reading and analyzing more picture books. I read books on the craft of writing. I read blog posts about picture books. I was critiqued and learned to critique. I revised. I took classes. Each of these steps enhanced my understanding of what makes a great picture book. If I hadn’t embraced each one, I don’t think I would have a book coming out in just a few days. 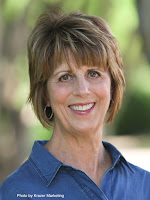 Penny Parker Klostermann is the author of There Was an Old Dragon Who Swallowed a Knight. She loves all kinds of  books, but especially loves very silly picture books that make her laugh. She has been known to hug her favorite picture books and seriously hopes that someday her books will gain huggable status too.
Penny is a member of SCBWI (Society of Children’s Book Writers and Illustrators). She was named the 2012 Barbara Karlin Grant Runner-up. She is represented by Tricia Lawrence of the Erin Murphy Literary Agency.
Penny grew up in Colorado and now lives in Abilene, Texas-the Storybook Capital of Texas!
SITE   |   FACEBOOK   |   TWITTER   |   PINTEREST
~~~~~~~~~~~~~~~~~~~~~~~~~~~~~~~~

Special thanks to Cassie at Random House Children's Books for the review copy as well as the chance to connect with the author and a THANK YOU from me to the author herself for taking the time to indulge my inquiring mind.  (THANKS!)  For more information on this title, the author, the publisher, or those books forthcoming, feel free to click through the links provided above.  This title was released August 4th, 2015, so be on the lookout for it on a bookstore shelf or virtual retailer of your choosing.
Until next time...happy reading!
Posted by Gina at 12:00 AM

Thanks so much for featuring my book! I appreciate your time and spreading the word :D