A Wedding for Christmas by Lori Wilde

Thanksgiving is creeping ever so close and with it, the holiday season melee.  It's the most wonderful time of the year...or so they say, so long as you don't get to caught up in the commercial side of things and remember to enjoy the season of goodwill.  In that very vein, I bring you a title that hit bookstore shelves last month but is ever so perfect for the pending reading season.  Today's book of choice is... About the book...
The whole town is ready for the holidays: The Cookie Club is baking, Main Street glitters with lights, the carolers sing . . .There’s even a Christmas wedding.

When bodyguard Ryder Southerland sees his best friend’s sister Katie at an L.A. Christmas party, he mistakes the slinky blonde for a celebrity stalker and tackles her. Then they tackle each other . . . at his place. The next morning, Katie’s gone, and Ryder tells himself it’s for the best. It isn’t. Now, one Christmas later, Ryder’s falling for the woman he’s been missing in the town he hasn’t missed at all .

Katie Cheek’s outgrown the romantic fantasies she had about Ryder when she was fifteen. Katie’s packed their hot night away in a box labeled “fling”—or tried to. But Twilight’s bad boy is the best man in her brother’s wedding. And up-close and personal, Ryder’s impossible to ignore. So Katie can either go into hiding—or surrender to Christmas magic.

Just hear those sleigh bells jingling,
Ring-ting-ting-a-ling too.
Come on it's lovely weather
For a sleigh ride...or anything else for that matter...together with you.

Between the unexplored (for now) sparks between Ryder and Katie, and the AMAZING Christmas events that take place in their wee Texas town (Dickens on the Square?!  Ye Olde Book Nook?!  Get me a ticket!), this book has so much going for it from the start, it's a wonder every Contemporary Romance fan hasn't cracked the spine on their own copy yet.  Or have they?  *peers through screen*

What began as a quest for two souls to find their way in this crazy old world, ends up as a meeting of much more than the minds (ahem) with the potential to be so much more, if only they'd get out of their own ways.  Ryder wanted to shed his bad boy image, or at least shake the rumors and whispers that surrounded him in his hometown.  Katie wanted to break her heart free from the loss of her soul mate, or at least feel something beyond sadness and rediscover her sense of self.  He ends up a bodyguard, not so certain that voids the bad boy image, but the job seems to work for him.  She steps into a another's shoes ala The Holiday (you know, the Kate Winslet, and Cameron Diaz movie?  Loved it!) and finds out that playing make believe can be fun but it's not truly the way back to ones self.  Their paths cross on her "vacation" in a meet cute straight from the silver screen and ends up with them between the sheets (or not...ahem) for a night they won't forget...but it's also one that won't be repeated per their own agreement.  Hahahahahahaha!  Yeah, like THAT's ever worked in the history of mankind....and let's just say that their night to remember becomes something neither can forget.  Good thing they live across the US of A from each other, right?  Umm, yeah...about that...

I must say, I fell for the story hook, line, and sinker.  From the leads trying to shed their former images to the way they seemed destined to "bump into each other", the secret meet ups to the sweetness of those moments they finally saw eye-to-eye, their blow ups to their utter meltdowns, each moment was real, each event memorable, each reaction or call to action true to character.  Never once did I feel out of step or wonder why one was doing this, that, or the other.  True, I wanted to lock them both in a room, administer truth serum, and record the whole thing for posterity a time or two, but you know, that wouldn't have been nearly as cute, romantic, or bad-boy-meets-good-girl-esque now would it?  ^-^

In the end, I gotta say there's much to be said about the "bad boy" type when it equates to Ryder Southerland. *wink wink* Our girl Katie had her hands full and her heart on the line, but in the end, I think her gut instincts were right on.  Apart, they were equally AMAZING forces, but as a couple, they were on fire! You'll be catching your breath right up to the last page, but boy oh boy was it well worth the ride.  Get yourself in the holiday spirit with this timely read, and you'll be looking for your own sprig of mistletoe to have a moment under. 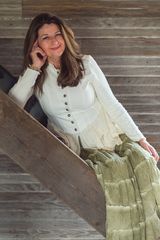 New York Times and USA Today bestselling author Lori Wilde has sold seventy-nine works of fiction to four major New York publishing houses. She holds a bachelor’s degree in nursing from Texas Christian University and a certificate in forensic nursing from Kaplan University. She is a member of the International Association of Forensic Nurses.

Her first New York Times bestseller, the third book in her Twilight, Texas series, The First Love Cookie Club, has been optioned for a television movie. The town of Granbury, Texas, upon which her fictional town of Twilight, Texas, is loosely based, honors Lori with an annual Twilight, Texas weekend each Christmas.

Special thanks to Michelle at HarperCollins for the copy for review.  (THANKS!)  For more information on this title, the author, the series, or the publisher, feel free to click through the links provided above.  This title is available now via Avon Books, an imprint of HarperCollins, so be on the lookout for it on a bookstore shelf or virtual retailer of your choosing.

The first year in a while I haven't got plans to do a seasonal challenge and yet I'm still enjoying everyone's festive posts.

On the face of it not a book that particularly appeals to me but, never say never, I'm adding it to my list should I change my mind and am in need of Christmas reads.