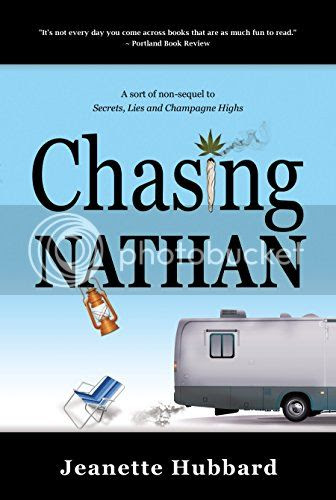 Jeanette Hubbard's humorous style of suspense writing has been compared to Carl Hiaasen and Janet Evanovich. In this quirky follow-up novel, a chance encounter in a remote forest campground plunges plucky retiree Claudie O'Brien into a vortex of crime, kidnapping, and a marijuana hijacking. A pleasant dinner with Nathan, the gentleman at the next campsite, is disrupted by the arrival of a very loud and a very angry young man. The next morning both Nathan and the man are gone, but Claudie suspects something is not right. No one believes her when she tells them that Nathan might be in danger. It's up to Claudie to connect the dots and find out why Nathan disappeared in the middle of the night.


Nathan regained consciousness somewhere just before Hammer turned off I5 in Yreka. They had used duct tape on his mouth, hands, and feet, and then wrapped it around his chest and the chair for good measure. He wasn’t going anywhere soon. The blood had crusted on the side of his head where Hammer had clocked him. The pain was deep and centered behind his left eye. He had gotten lax. After all those years in Lebanon, and other more dicey places, he had left his RV unsecured. A child could have found the Glock 39. He wiggled his jaw a bit, the three days growth of beard had prevented the duct tape from adhering securely to his skin, and he worked to loosen it. He didn’t want it to drop noticeably so he did just enough so he could talk or shout if needed. The majority of the space inside the RV was taken up with stacks of plastic-wrapped marijuana bricks. There wasn’t any way he could get to his second, emergency revolver that was hidden under the sink. Pity. Hammer parked the RV in a small park and reached over to the passenger seat where he had a small cooler and pulled out a cold beer. He drank it down in three long pulls and then sat fidgeting for about fifteen minutes before he started calling. First his brother Sprocket, and then someone else called Dwight. Hammer was nervous and agitated. The trick was how to use that to his advantage.

Nathan watched the single headlight of a truck go by on the road. He knew they were in northern California, an area referred to as the Emerald Triangle. Full of nasty boys. He could only wonder why thieves from Oregon would set up a drug deal in the middle of California’s prime marijuana growing fields. Well, it wasn’t hard to figure out. These weren’t the brightest guys he’d come across. Yet, he was the one tied up. Not time to feel too superior. The truck with one headlight drove by again. A little slower this time.

“You do know that you’re trying to do your deal in enemy territory?” Hammer jumped a foot off his seat, giving Nathan a small amount of satisfaction.

“What the f***? How did you …?” “It’s the beard. Duct tape can’t adhere strongly to it. A good thing too. I have a slight cold. I would have had trouble breathing. I assume you’re not planning to kill me?”

“The way I look at it, Hammer—you don’t mind if I call you Hammer?—if your buyer doesn’t get here in the next, say, thirty minutes or so, you’re going to have an up front and probably hazardous to your health kind of confrontation with some local guys. They find out you’re selling dope in their territory, they’re going to be real perturbed. They’re going to have a short and to the point discussion about the lack of respect that demonstrates to them.”

“What the f***? I didn’t understand half of what you said, old man. Can’t you speak plain American?”

“My name’s Nathan. Sorry about the verbiage. I was a university professor. Big words were my stock and trade, so to speak. To be simple, you may have already attracted the attention of some other bad guys. They may be coming back. If they do, they will probably shoot at you. I don’t like the idea of being in the middle of your shit. Is that plain enough?”

“Don’t you worry about me, Professor, I ain’t exactly unequipped for run-ins with other dudes. This here is one nice pistol. Where’d you get this? You sure don’t look like someone who’d be packing a Glock. Even if it’s a little bitty one like this.” Hammer pulled the gun out from under his seat and waved it in Nathan’s direction. Nathan pretended to flinch; unless the idiot had been playing with it there was no bullet in the chamber, so the deadly weapon was currently just a piece of metal.

“Don’t worry yourself, Professor, I ain’t hit anything I didn’t want to since I was ten.”

“I have a question for you, Hammer. Why am I here? Why didn’t you just leave me at the campground? I’m just unnecessary baggage. You could kick me out now and there wouldn’t be any way I could muck up your plans.”

Hammer snorted. “My dumb brother thought you’d freeze or something. Don’t worry, Professor, I’m dumping you as soon as I can.”

Nathan watched him closely. Hammer’s eyes and forehead were scrunched in thought. Nathan assumed he was trying to figure out a way to get rid of the problem that was Nathan. A witness who could identify him. The thought that this idiot might decide on a lethal solution to his problem made Nathan highly uncomfortable. He’d have to help Hammer come up with a resolution that didn’t end up with Nathan rotting in a shallow grave in the forest. There had only been one other time that he’d gotten in a jam, it was when he was “consulting” for a certain unnamed government agency. He kept his captor talking, trying to make himself human to a man who viewed non-believers as sub-human. That time of course, Dani swooped down and saved the day. He needed to let her know that somehow he’d tangled with some nasty boys. And in the meantime, as the great Chinese general Sun Tzu would have advised, “Pretend inferiority and encourage arrogance.” The great thing about dumb people like Hammer, they never knew they were dumb. They always thought they were the smartest people around. Sort of like the Enron guys.

Jeanette Hubbard was brought up in Iowa to be a very good girl. Then she moved to Portland, Oregon the city that prides itself on weird. She has utilized her degree in English from the University of Iowa in a variety of jobs, including driving a school bus, selling car insurance, and growing, (and sometimes killing), plants at her wholesale nursery west of Portland. She now lives with her Border collie Buddy, Mitten the monster cat, her roommate's two demented small dogs, a miniature horse and two chickens in a small house in SE Portland. Actually, the horse and chickens live in the backyard.


Other Books By Jeanette Hubbard:

On a crisp winter mid-afternoon, Claudie O'Brien finds herself parked in her BMW with some old pills, a bottle of champagne, and no reason to keep on living. When an accident occurs in Claudie's attempt to take her own life, she finds herself rescued by Peter, a local vice-principal turned tow truck driver. In Secrets, Lies and Champagne Highs, written by first-time novelist Jeanette Hubbard, readers follow Claudie's journey to Sisters, Oregon,having moved into the remodeled garage of Peter, his two sweet kids, and his not-so-sweet second wife, Chrystal. Claudie quickly realizes that she's entangled herself in more than she anticipated. On top a botched suicide,there's the meth lab across the street, a non-existent murder plot turned reality, a phony spiritual guru, and more affairs between local citizens than she can keep straight.

After reading this humorous take on small town life in Central Oregon,  those sleepy little towns will never look the same.

Special thanks to Cami at Reading Addiction Virtual Book Tours for the information in the post above as well as the chance to bring this promotion to you.  (THANKS!)  For more information on this title, the author, or to pick up a copy to call your own, feel free to click through the links provided above.  This title is available now, so seek thee out a copy at your favorite online retailer.