Today, we're diving between the pages of a book that warns right from the start that reading just might be able to kill you.  *-*  Scary thought, and yet not quite as scary as the incredible world a couple of best friends are about to be thrust into...and all because of a book.  *gulp*  Ready or not, fair readers, because the day's adventure is about to being!  Today's ebook of choice is...

About the book...
Penny and Laci are headed for a mundane summer vacation until a mysterious journal unlocks a portal to another world and they find themselves face to face with a baby dragon.

In an attempt to send their new acquisition back to its home, the girls, along with two neighborhood friends, get sucked through to a mythical world. In this land, they must battle foes seen and unseen, pushing them to both their physical and mental limits. If they fail to stop the powers they’ve unleashed, it could not only destroy this strange world, but also annihilate their home.

We begin with two best friends on a mission...to clear away some attic clutter and hunt down grandma's tablecloths.  Exciting stuff, right?  Umm, okay, so maybe not...yet at least.  Flash forward to a mysterious journal and emerald discovered beneath the floorboards, words of unknown origin and meaning uttered without a thought, a brilliant flash of light where none should have existed, and a new scaly friends that should simply not be.  Oh, Laci...you have some esplainin' to do! (Sorry, play on words for those that know the quote... ^-^)

I gotta day, these two besties are certainly a matched pair.  They stick for each other in good times and bad, playing to the other's strengths and boy oh boy are they about to be tested.  Between putting up with the shenanigans of their boy duo counterparts, Buzz and Ethan, on a quest cross country (world?  dimension?), understanding that some do better in worlds of fantasy than others (fictionally and literally), and they don't always have to be right, there are gonna be some sticky situations and hurt feelings that need mending.  Can't say I blame them considering the situation, but still...Penny gets in a jab or two at Laci that set MY head spinning.  Good thing I wasn't actually there with them because there might have been some ear tugging or slaps upside the head to contend with for both the ladies AND the gents.  Moving forward...

There are many more antics and dangers to deal with than simply the guys versus gals sitch...and many or much more deadly.  We're talking vines with mind of their own, pirates that would just as soon gut you as they would laugh in your general direction, dashing young wannabe heroes faking their way through their latest (*cough*...first) quest, and BIG SCARY FIRE-BREATHING DRAGONS of several varieties...oh and Digger.  He's not so scary though, just misunderstood....aren't you Digger?  Such a good boy....  Their coming there may have been an accident (MAYBE...*dun dun dunnnn*), but their getting back to their own time/place is gonna have to be a team effort, especially when Hallvard...and the old guy...and the pirates...and well, you'll see.

In the end, it was quite the exciting adventure, filled with twists and turns, betrayals and discoveries, love lost AND found. That characters were memorable, and though the roster seemed to continually grow, those we needed to keep close remained more scant, allowing readers to fully immerse themselves in the story, not play who's who. From the sound of things at book's end, there might be more to come too! Can we say wish list?  Recommended for Children's Fantasy adventurers from the small to the tall.  There is much fun to be had between these pages, just don't go reading anything that at first appeared indecipherable and magically arranged itself at second glance...especially if you've got any jewels nearby.  Just sayin'... 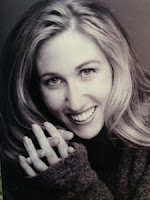 Mark was born and raised in Southern California. He graduated UC Santa Barbara with a degree in film and has worked in the film industry for years. He has written several screenplays and had a show optioned by MTV. He lives in Los Angeles with his wife Rebecca and his daughter Sara. This is his first novel, and hopefully not his last.

After Melora graduated from the UCLA School of Theater, Film and Television, she worked in the television industry for several years before becoming a library volunteer at her daughters’ school. Her passion for both reading and entertainment inspired her to write. This is her first novel. She currently lives in the Los Angeles area with her husband, daughter, and a pet bunny and a fish. Oh…never mind, the fish died.

Special thanks to Kathy at I Am A Reader, Not A Writer and Ebooks for Review for the...well, ebook for review. (THANKS!)  For more information on this title, the author, or those promotions on the horizon, feel free to click through the links provided above.  This title is available now, so be on the lookout for it on virtual shelf of your choosing.

Email ThisBlogThis!Share to TwitterShare to FacebookShare to Pinterest
Labels: 2016, Blue Tulip Publishing, book review, children's fiction, dragons, eBook, fantasy, I Am a Reader Not a Writer

A mysterious journal, a baby dragon ... you need say no more. Great review Gina, this sounds like my kind of read.