Hi there!
Thanks for joining us today on Satisfaction for Insatiable Readers... the place to be for bookish fun any day of the week.

When the calendar gets busy, the calendar stays busy and we become a two post kinda place. Are you good with that? I thought you might be 😉. Today's second post de jour comes to us via Trident Media Group LLC and stars a Paranormal release that sounds utterly thrilling!  It's the second in a series, but I'm betting it can be read as a stand alone too...though, you know, who REALLY ever backed down from the "challenge" of reading ONE book before another.  Am I right?  Ready for not readers, please join me in welcoming today's release to the spotlight... 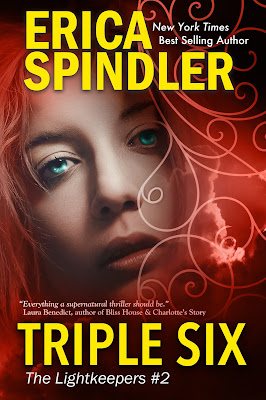 The countdown continues . . .
Detectives Micki Dare and Zach Harris are back in TRIPLE SIX, their second adventure in Erica Spindler’s supernatural thriller series The Lightkeepers.

It's been three months since that night - the night that Micki almost died. Physically, she's healed but the nightmares remain, and she can't shake the feeling that more happened that night than Zach is telling her. The only thing she can do is try to carry on as normal and solve the latest case she and Zach have been assigned to.

A string of brutal home invasions are rocking New Orleans and the families targeted seemingly have nothing in common. Why were these victims chosen? The deeper Micki and Zach go into the case, the more they realize something isn't right. There's something . . . familiar about the person doing this - and it's a familiarity Micki has been trying to forget. Suddenly, this case is hitting too close to home and Micki has to decide if she really wants to learn the truth about that night . . .

Terrifying and suspenseful, the new novel from Erica Spindler is a masterclass in thriller storytelling - you won't be able to put it down.

"What follows brings the story threads together seamlessly and Micki and Zach are faced with two of their toughest battles yet – the powerful force threatening all the good in the world and the even more powerful force of a stubborn, teenaged heart." - IndieReader

Edgy and charged with atmosphere, The Final Seven is exactly what a supernatural thriller should be: a battle royale for the human soul. Spindler knows her stuff. – Laura Benedict, author of Charlotte's Story and Bliss House

"Erica Spindler has long been an innovator, but she's created something truly special with this debut in her new thriller series, THE FINAL SEVEN. Engrossing, exciting, and genuinely scary, Spindler takes you on a relentless ride that doesn't let up until the last line. I can't wait to read the next The Lightkeepers installment featuring Detectives Michaela Dare and Zach Harris - Spindler has created a partnership for the ages." – J.T. Ellison, NYT bestselling author of WHAT LIES BEHIND

Sounds good, right?
Great! So we're on the same page!
Now, let's dig a little deeper with a SPECIAL EXCERPT just for you!

Monday, October 19
1:00 P.M.
Zach lost what Micki said as a buzz filled his head. Like a colony of bees had descended upon him. He moved deeper into the room. The buzz intensified, becoming as chaotic as the scene before him. Furniture was toppled, pillows ripped open, foam guts strewn wildly about. Lamps smashed. Mirror broken.
Zach bent to pick up a piece of the shattered lamp. A memory. Wild laughter. Delight in destruction.
“What?” Micki asked softly.
“It’s good. Lots of energy, fresh. You go find Gibson. I’m going to do my thing.”
She nodded and moved on. No comment, not even an eye roll. Total acceptance of what he brought to the party. He watched her a moment, amazed at how far they had come as a team.
He carefully replaced the piece of lamp, moving on to the kitchen. Food had been smeared across stainless steel appliances, glassware broken. He squatted down and closed his eyes.
Flashes of light and sound. Images darting forward, then evaporating. Music. Heavy metal. Metallica maybe. Never was his genre. A kid. Young. Too young. Giggling as he smashed one plate after another.
He? Zach stopped, attempted to slow, focus on the image. Hoodie, bandana covering everything but the eyes. Yes, male. Those eyes, brown yet bright. In a way they shouldn’t be, he thought. What did it mean?
From the kitchen, he went back to the bedrooms. The first, obviously a guest room, was untouched. From there he moved across the hall. A kid’s room. Girls, judging by the tsunami of pink. He took a cautious step inside, waiting for the psychic terror to hit him.
Instead, children singing. Playing a children’s game. Ring around the rosie, a pocket-full posies...
He moved his gaze over the interior, confused. It was messy, toys strewn about, bed a jumble. But not the destruction of the rest of the house. More like the Fowler girls had had a play date.
He made his way through the room, just to be certain he wasn’t missing anything. Kid energy was different. Faster moving. Mercurial. He felt tears and joy, fear and elation, all tangled together in a crazy mix.
Zach frowned. They must have heard the chaos, raised voices and shattering glass. Why weren’t they frightened?
The master bedroom was at the other end of the hallway. As he neared it, a heavy sensation settled over him, slowing his steps, making each one an effort. His heart rate accelerated and sweat broke out on his upper lip.
He drew in a deep breath and closed the distance between him and the bedroom. There it hit him—energy, in an angry wave. He felt it in his chest first, then his gut. And light. So bright it burned. Then dark. Deep as pitch. Like a strobe: dark, light, dark, light, faster and faster. His stomach lurched, his knees started to buckle and he grabbed the door frame for support. 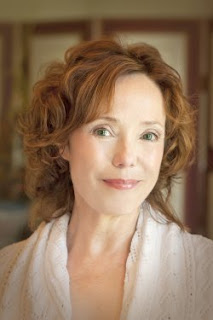 Erica Spindler is the New York Times and International Chart bestselling author of thirty-three novels and three eNovellas. Published around the globe, she has been called the “The Master of Addictive Suspense” and “Queen of the Romantic Thriller.”
The Lightkeepers is Erica’s first series, something she’s wanted to do for years. All she was waiting for was the right characters. She found them in Micki Dare, reformed southern belle turned kick-ass cop, and Zach “Hollywood” Harris, a charming bad boy with some very cool, save-the-world skills.
Erica splits her writing time between her New Orleans area home, her favorite coffee shop, and a lakeside writing retreat. She’s married to her college sweetheart, has two sons and the constant companionship of Roxie, the wonder retriever.
Erica is currently at home in New Orleans, writing Micki and Zach’s next adventure, FALLEN FIVE.


Special thanks to Emily at Trident Media Group LLC for the chance to bring this promotion to you.  (THANKS!)  For more information on this title, the series, the author, or those promos on the horizon, feel free to click through the links provided above.  This title is available NOW, so be on the lookout for it on a bookstore shelf or virtual retailer of your choosing.