Raising a little hell with... Hellfighters by Alexander Gordon Smith

Hi guys and gals!
Welcome back to the FRIDAY edition of Satisfaction for Insatiable Readers.

Whew!  What a week!  Can I get an amen? ^-^  Seriously though, world wise and work wise, it's been pretty intense; so glad I have books to disappear into and forget it all for a while.  Take today's pick for instance...though not anything along the lines of a light or fluffy read, it will definitely take your mind off your troubles (or the possible one taking charge of our nation) and put you square in the middle of a fight too keep the world from turning into the devil's playground without supervision.

Two warnings first though...
One...it's not for the faint of heart, but then again, NONE of his books really are.  You don't get compared to Stephen King and write about singing daisies.
Second...it IS a sequel and though others may say otherwise, I personally think you have to read the first one in order to understand what's really going on, the depth of the situation, and the characters connections along the way.

Anywho, let the fanfare play because as this motley crew would tell you...

"If you want to fight the devil, you have to raise a little hell..."

Today's book of choice has arrived... 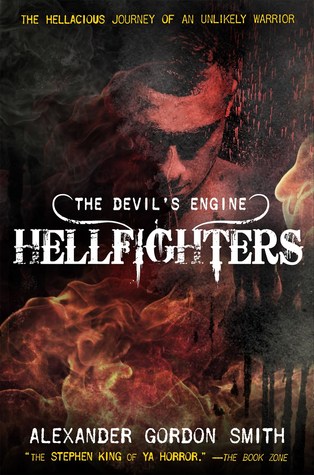 About the book...
Thrown into a relentless war against the forces of darkness, fifteen-year-old Marlow Green and his squad of secret soldiers must fight for control of the Devil’s Engines―ancient, infernal machines that can make any wish come true, as long as you are willing to put your life on the line. But after a monstrous betrayal, Marlow, Pan and the other Hellraisers find themselves on the run from an enemy with horrific powers and limitless resources―an enemy that wants them dead at all costs. Failure doesn’t just mean a fate worse than death for Marlow, it means the total annihilation of the world. And when all looks lost and the stakes couldn’t be higher, just how far is he willing to go?

My first experience with this author's work was the fascinating, dark, uber-scary-yet-oh-so-good Young Adult series, Escape from Furnace.  It featured a world on the brink of an apocalypse like nothing you could fathom and a cast of would-be-heroes that you weren't likely to forget...and I haven't.  I can still shed a tear for Donovan.  I can still feel the angst of Alex as he tries to hold everything together while it's crumbling in his hands.  I can still hear Zeke making a crack when all seems lost beyond reason.  Ahh, good times...but while those memories are grand, I was craving some new blood, I mean reading material, and with the release of The Devil's Engine:  Hellraisers last year, my reading prayers were answered.

I dove into the new series like a dolphin to water...wait, that's not nearly dark enough, how about a leech to a blood bath?  (~shudders~)  It was hard hitting, heavy and layered with complexity you didn't see coming and yet was as easy to follow as the bloody footprints of an inept serial killer.  (You can read my review right here on SFIR.)  In this second installment, it only gets better...and by better I mean, darker, more complex, building tangible webs that breathe with the life Mr. Smith has written into being with his powerful imagination and yet, there's still heart.  I know, I know.  HOW CAN THAT BE WITH EVERYTHING I'VE SAID?  You don't have to scream...I heard you.  (*wink*)

The heart isn't on anyone's sleeve (well, it is literally to some degree with a particular character, but not in the "tender hearted" sense you're thinking), or pouring from someone's lips in bouts of poetry (again, yes to the pouring, but not in this way).  The heart in these works beats strong and true in his characters.  There is genuine feeling in each and every one of them, for better or worse.  It's in every breath they take, every task they undertake, every misstep and loses, every move forward or triumph.  Their hearts may be buried under so much muck that you'd need to bathe everyday for twelve years to attempt to remove the first layer, but they are there and the hope that lives in them is what drives them through the depths of hades to try and save a world that may not even give them a second thought.

In closing, I will leave you with my final thoughts as posted on GoodReads upon finishing the book...

Wait, what?! No! It can't end there, it can't! But, but, so much has happened, so much may still happen and we're just left to wonder what was there, who survived, the truth of EVERYTHING?!?! Aaaaaarghhhh!


Yes, my friends, it was a FANTASTIC read.  Glorious in it's darkness but with oh so much hidden light just waiting to burst through.  I can't recommend it and its predecessor enough.

Alexander Gordon Smith is the author of the Escape from Furnace series, including Lockdown and Solitary. Born in 1979 in Norwich, England, he always wanted to be a writer. After experimenting in the service and retail trades for a few years, Smith decided to go to University. He studied English and American Literature at the University of East Anglia, and it was here that he first explored his love of publishing. Along with poet Luke Wright, he founded Egg Box Publishing, a groundbreaking magazine and press that promotes talented new authors. He also started writing literally hundreds of articles, short stories and books ranging from Scooby Doo comic strips to world atlases, Midsomer Murders to X-Files. The endless research for these projects led to countless book ideas germinating in his head. His first book, The Inventors, written with his nine-year-old brother Jamie, was published in the U.K. in 2007. He lives in England.

Special thanks to the marketing team at MacMillan for the ARC for review.  (THANKS!)  For more information on this title, the author, the series, or the publisher, feel free to click through the links provided above. This title just celebrated it's book birthday November 1st, 2016 via Farrar Straus Giroux, so be on the lookout for it on a bookstore shelf or virtual retailer of your choosing.