So, today we embark on a dangerous journey.  We're traveling through time and countryside, around Dangers unknown and to one of the few beacons of light still standing in the encroaching darkness. All this for the chance to stand between the Dangers and the city we love, as a last line of defense.  Wait...what?  Stand BETWEEN them?  Doesn't that mean, you know, an end to, well US?  To not fall victim to those Dangers lurking all around, we've but one chance...and they call themselves... 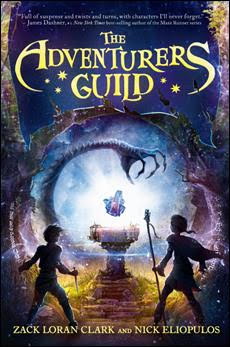 About the book...
Few ever asked to join the Adventurers Guild. . . . Their members often died young.

In one of the last cities standing after the world fell to monsters, best friends Zed Kagari and Brock Dunderfel have high hopes for the future. Zed desperately wishes to join the ranks of the Mages Guild, where his status as Freestone's only half elf might finally be an asset. Brock, the roguishly handsome son of merchants, is confident he'll be welcomed into the ranks of the Merchants Guild.

But just as it seems the boys' dreams have come true, their lives take a startling turn . . . and they find themselves members of the perilous Adventurers Guild.

Led by the fearsome Alabasel Frond, the guild acts as the last line of defense against the Dangers-hungry, unnatural beasts from otherworldly planes. And when the boys uncover a conspiracy that threatens all of Freestone, Zed, Brock, and their new allies-Liza, a fierce noble, and Jett, a brave dwarf-must prove their worth once and for all.

This start of a thrilling new series is sure to be a hit with readers who like their fantasies clever and action-packed, with tons of humor and heart. 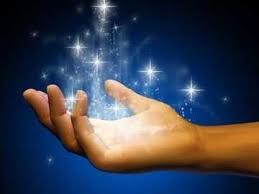 A story that begins with the sorting of children among guilds for lifelong occupations, turns into an all out magically infused war that'll take down as many as painfully as it can along the way...of yes, there will be no mercy seen, nor class spared. We see much character growth in our young charges, as well as a loss of innocence as their dreams are torn away and they face Dangers great and... well, greater. The subplots running just under the surface of it all serve to add another dimension to the oddities happening, and instill a greater fear for the futures of them all...after all, one doesn't want to become TOO attached to those who may not make it to the next adventure.

Right from the start, I found myself really digging into the tale and as things progressed becoming more and more treacherous, that intense desire to see where things led never let go.  Our motley crew turned fearsome foursome of young leads really make their mark.  Liza with her noble blood, yet burning desire to follow her dreams outside the shadow of her overwhelming brother (don't EVEN get me started on that brat!).  Jett though small in stature was fierce of heart and his hope to discover the lands of his forefathers was touching.  Brock with his witty wordy repertoire and future all planned out showed as much inner strength when he didn't hesitate to throw it all away when his best bud needed a friend (though there may have been a bit more motivation there than JUST their friendship status).  Then we have young Zed, part elf part human, but all innocence, determination, and spirit.  He may not always get it right, but he means well, and you best believe he will see things through to the end...a good thing MOST of the time... *dun dun dunnn*  ...and that's just a few of the memorable members of this awe inspiring guild!

In the end, it was a grand adventure that I can't wait to embark on once again when the next title releases, especially after that harrowing end.  I mean just think, if Alabasel had chosen differently...or if Zed didn't have that magically charged ability to...and of course we can't forget Liza's part when she...or Brock's deal with a devil (of sorts)....and then speaking of deals, what possessed Zed to agree to...ugh!  So many things may be finished for now, but the end, in truth, is still a distant future...which means more adventures for us!  Recommended for Middle Grade Fantasy fans and beyond! 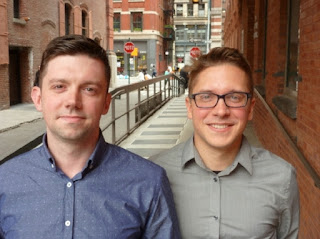 ZACK LORAN CLARK and NICK ELIOPULOS grew up in Florida and now live in New York. Best friends, they get together to play Dungeons & Dragons every week. Zack fervently hopes that magic is real; Nick desperately hopes that monsters are not. The Adventurers Guild is their first novel. 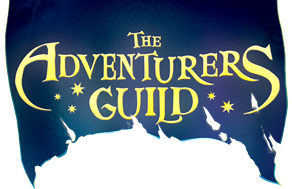 Special thanks to Cassie at Disney Publishing Worldwide for the ARC for review.  (THANKS!)  For more on this title, the authors, or the publisher, feel free to click through the links provided above.  This title is set to release TOMORROW (10/03/17) via Disney Hyperion, so be on the lookout for it on a bookstore shelf or virtual retailer of your choosing.

Don't forget to stop by the book's official site to check out the other goodies that await you including this nifty QUIZ that gives you the chance to see which guild YOU would belong to, if given the chance!  According to my results, I'd be with the Mages Guild...but apparently wouldn't last long and end up joining our new friends here battling Dangers til the end.  *gulp*  Oh well, perhaps I better think about which weapon I'd choose for my first night outside the walls a little more carefully...

From that truly magical cover to your glowing review, everything about this series screams READ ME.

Sounds like a ton of fun. Thanks for bringing it to my attention. I've added it to my list. :)