PYR BLOG TOUR: The Last Kids on Earth and the Nightmare King by Max Brallier

Today, we're joining a Penguin Young Readers blog tour already in progress featuring the latest addition to a VERY popular series.  It stars none other than Jack Sullivan, Defender of the Realm, Master, Creator, and Keeper of All Things Fun...and perhaps even more importantly this time around, Protector of Friends (and Friendship).  So, if you're ready to face the powers of evil, battle hordes of zombies, and desperately try to escape the clutches of the newest menace in a post-monster-apocalypse world, I suggest you hang on because today's book of choice is front and center... 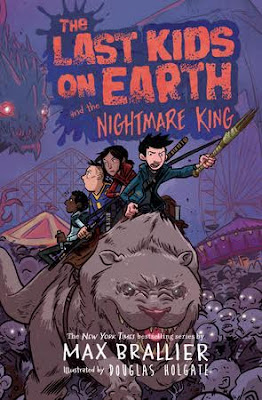 About the book...
When Jack and his friends find a one-way radio broadcasting live updates, they realize they might not be the last kids on Earth after all. June, Quint, and Dirk are thrilled because this means they could get to see their parents again someday, but Jack is bummed. Living in a tree house with his best friends, racing through town on tricked-out Go-Karts, playing tug-of-war with monsters, successfully battling the Destroyer of Worlds--it's the happiest he's ever been, and he doesn't want it to end. If Jack can make his friends understand how fun it is here, maybe they'll never want to leave him. And if he teams up with the probably extremely evil King Wretch monster--a monster who's capable of giving him visions, even predicting the future--maybe he can do just that...

If you've been following the series thus far, you KNOW the fun you're in store for.  Monsters, zombies, evil warlords from other dimensions trying their darnedest to make our world theirs, and everything else in between.  You also know that while Max is a monster slayer extraordinaire, he isn't delusional enough to think he can do it all by himself.  I mean, initially he had to, but once he started gathering the "last kids on earth", a motley crew of friends, former foes, and potential flames, he discovered not only what a force of many can accomplish versus a single soul with a slugger blade (despite his uber sized intent), but also the power of friendship...and darn it all, he liked it.  After all, it's not a feeling he was exactly familiar with in the "before" as it were, so when things start to seem a little "end of monster apocalypse" this time around, you can't help but feel for him.

That's right.  It could be the end of the end of the world, or at least their single status standing, by the the time we reach book's end, and while Jack doesn't harbor crazy notions of wanting to fight monsters the rest of his days, he's not exactly ready to give up the companionship, the togetherness, the family he's found in his little group.  His mission is clear...save the world as they know it once again from the evil other dimensional warlord AND show his friends that sticking together is the only way they will truly be happy, other humans potentially alive out there be darned.  Oh boy...if you can't guess already, things are gonna get interesting.

In the end, it was a great add to the growing series, perfect for boys and girls alike.  For me, while the monster infused adventure was just as thrilling, fun, and funny as always, I enjoyed the hidden emotional depth of this one.  It added another dimension to Jack's character, showed growth even in a time of adultlessness, and ultimately endeared him and the others to us THAT much more.  Let's not forget about the AWESOME COOL illustrations scattered throughout that let you fully immerse yourself in every off the wall, daring, risk filled self imposed mission they undertake in the name of survival...and entertainment. 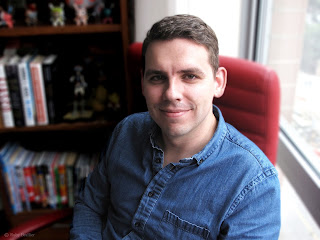 Max Brallier (www.maxbrallier.com) is the New York Times bestselling author of more than thirty books and games, including the first two books in The Last Kids on Earth series. He is the creator and writer of Galactic Hot Dogs, an ongoing middle-grade web serial and book series with Aladdin. He writes for licensed properties including Adventure Time, Regular Show, and Uncle Grandpa. Under the pen name Jack Chabert, he is the creator and author of the Eerie Elementary series for Scholastic Books. In the olden days, he worked in the marketing department at St. Martin's Press. Max lives in New York City with his wife.

Special thanks Friya at Penguin Young Readers for the copy for review and the chance to bring this tour to you. (THANKS!) For more information on this title, the author, the series, or the publisher, feel free to click through the links provided above. This title is available now via Viking Children's Books, so be on the lookout for it on a bookstore shelf or at a virtual retailer of your choosing.  Be sure to check out the other stops on the tour for more AWESOME SAUCE fun!

I'll check it out, we're try8ing to find out what types of books my son (10) likes. So far, believe it or not, he likes non-fiction.