PUYB BLAST: Wickedly Ever After by Lotta Smith - SPOTLIGHT + GIVEAWAY!

Today, we're joining Pump Up Your Book for a BOOK BLAST starring a Paranormal Cozy Mystery that sounds like a perfect addition to our current reading season.  Don't believe me?  Well, you don't have to take my word for it.  Let's take a CLOSER look, shall we?  Ready or not, make way for today's blog tour guest and spotlight title... 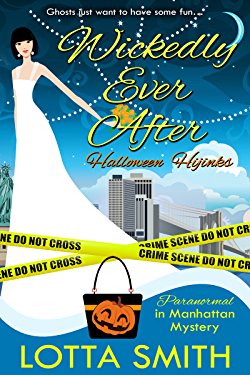 As the new Mrs. Rowling, life is supposed to be easy for former FBI Special Assistant Amanda Meyer. Marriage to her drop dead gorgeous boss Rick is everything she dreamed of, unfortunately she can’t sleep, and she can’t even blame the ghost of his late stepmom Clara for popping up in the middle of the night with a tricky request.

Someone staged mechanic Fynn’s death to look like a suicide, and now his unhappy ghost is keeping Clara and her dead friends awake all night. Proving he was murdered will keep the newlyweds hopping, and the real trick will be staying alive in this hilariously wicked book in the Manhattan Mystery Series.

At exactly three o’clock in the morning, I was in bed, turning over for the umpteenth time. For some unknown reason, I couldn’t fall asleep. In fact, I didn’t have even a blink of sleep.

Okay, so I was pretending not to know the reason for my difficulty, but I could come up with possible reasons. For starters, I had a little too much espresso cake after dinner and a few more cups of strong green tea than the recommended amount at lunch. Also, in the past few hours alone, I had at least thirteen people visit me, asking about the whereabouts of their personal belongings and if I thought their spouses were cheating on them. All of them happened to be former residents of this upscale condo on Fifth Avenue in Manhattan, where I called home. The last straw was Mrs. Williams, who kept demanding I return her hearing aid. I kept telling her that I wasn’t the evil woman who hid her belongings, and I shared my hunch that her family might have forgotten to put her hearing device with her; however, she didn’t seem to fathom what I was trying to say—perhaps because she didn’t have her hearing aid.

By the way, did I mention that all those people who visited me during these ungodly hours had been dead for years?

My name is Amanda Rowling, née Meyer, a part-time secretary for my husband and mostly a stay-at-home housewife, and people, including but not limited to my husband Rick, usually call me Mandy.

Anyway, I was trying my best to grab some sleep before dawn, not that I had to get up early and go to work in the morning, but Rick had been busy since joining USCAB—United States Cover All Bases, a security-based conglomerate owned and run by his dad—and I wanted to do my best to be his super-supportive partner. Cooking power breakfasts for him and myself had become my ritual since I moved in with him at this condo over a year ago, and I was determined to continue this ritual. Anyway, using knives and a hot oven in a sleep-deprived status wasn’t high on my to-do list. I tended to commit faux-pas in the kitchen, like scorching eggs and bacon to a crisp, whenever I was short of sleep.

Before marrying him, I used to work for the FBI’s New York City headquarters as a special assistant. At first, I was just an assistant with a mission to keep my then-boss Rick Rowling, the sexy, arrogant loose cannon who loved nothing more than trouble, from wreaking havoc and destroying NYC. However, a little after starting my FBI career, I developed a special skill of seeing dead people and communicating with them, and my tasks expanded to interviewing murder victims and dead witnesses.

When Rick, who was the head of Paranormal Cases Division and the only colleague I had, left the feds to join his family business, I followed his suit and resigned from the feds.

Even though Sheldon Hernandez, the head of the FBI’s New York City headquarters, offered me a lucrative consulting contract, I declined. At that time, leaving my life with the FBI, communicating with dead people and dodging frequent temper tantrums thrown at me by the deceased, and concentrating on being Mrs. Rowling seemed like a fabulous idea. But after the wedding and returning from our honeymoon, I wasn’t sure if I made the right decision. At that time, I presumed I’d stop encountering the spirits of dead; however, things didn’t go as I’d hoped. I was still having as many ghostly visitors as before.

And, recalling my past life as an FBI assistant, I was horrified to found myself sort of missing my days dealing with the murderers, crooks, and dead people. Okay, so having nothing to do with criminals should be the norm for most people, and when I left the feds, I couldn’t wait to spend my days without worrying about being assaulted by evil ghosts and bad humans, but…

Lotta Smith is the author of Paranormal in Manhattan Mystery series. She fell in love with mystery the moment she developed consciousness. She is especially fond of lighthearted murder mystery stories with a little sprinkle of romance.

She went to medical school hoping to see real corpses and sexy professors. Back then, she was into this kind of mystery series about a smokin' hot forensic medicine professor and a quirky female student going a-sleuthing, cracking unsolvable cases. Lotta truly, madly wanted to team up with a super hot professor and crack a difficult murder or two. (Note; she got to see the corpses, but sexy professors were nonexistent.)

Lotta loves to hear from her readers. Feel free to drop her a line at lottasmith_author@yahoo.com.


Lotta Smith is giving away a collection of six books:
Wickedly Ever After: Halloween Hijinks by Lotta Smith
Trick or Treason by Kathi Daley
A Witchmas Carol by Amanda M Lee
Dark, Witch & Creamy by H Y Hanna
Curse of the Day by Annabel Chase
Dead Man Talking by Jana DeLeon


Terms & Conditions:
By entering the giveaway, you are confirming you are at least 18 years old.
One winner will be chosen via Rafflecopter to receive the book collection.
This giveaway ends midnight October 13.
Winner will be contacted via email on October 16.
Winner has 48 hours to reply.

Special thanks to Dorothy at Pump Up Your Book for the chance to bring this promotion to you.  (THANKS!)  For more information on this title, the author, the series, THIS TOUR, or those on the horizon, feel free to click through the links provided above.  This title is available now, so be on the lookout for it on a bookstore shelf or virtual retailer of your choosing.

Loving your excerpt, this does indeed sound like a perfect seasonal read.