Hi guys and gals!
Welcome back to another exciting day here at Satisfaction for Insatiable Readers.

Today, we're joining a blog tour already in progress from the folks over at Penguin Young Readers.  It stars the amazing Children's Non-Fiction Picture Book series Ordinary People Change the World by Brad Meltzer and highlights memorable "characters" from our past still affecting our present in ways you may or may not have known, all in an eye pleasing package with smiles, and humor to boot!  It's in that newish category of EDUtainment and it really leaves its mark, but you don't have to just take MY word for it.  RIGHT NOW, you'll find these titles throughout the blogosphere in reviews, spotlights, and more.

In today's spotlight, we're paying tribute to TWO famous figures from our past.  One fought his battles through peace, while the other forged paths through our nation never dreamed possible (let alone by a woman!).  First up, our lady of the hour...

About the book....
Sacagawea, the only Native American included in Lewis and Clark’s historic expedition, joins the inspiring list of heroes whose stories are told in this New York Times Bestselling biography series.

Sacagawea was the only girl, and the only Native American, to join Lewis and Clark’s Corps of Discovery, which explored the United States from the Mississippi River all the way to the Pacific Ocean in the early 1800s. As a translator, she helped the team communicate with members of the Shoshone tribe across the continent, carrying her child on her back the whole way. By the time the expedition arrived at the west coast, Sacagawea had proved that she truly was a trailblazer.

If this isn't an inspiring story for young ladies, I don't know what is!  We learn how this young lady was actually given her name (not at birth!) and the myriad of ways it was spelled (who'd have thought!).  We discover the atrocities of war even back then (ever sold to your future husband?  Didn't think so...), and how motherhood could be on the new frontier (travel the wilderness with a baby on YOUR back and see how far you get!).  We even learn that the images we've come to recognize of this fair Indian maiden...may not exactly be of this fair Indian maiden (I know!  It blew my mind too!)...and while all that is sinking in, we are entertained as well with the lovely and at times comical illustrations that fill ever two page spread.  Definitely a life story you don't want to miss.

Next up on our feature today is the young old man (but eventually old old man) who was known for fighting violence with...peace?  Yes, peace...or more precisely Satyagraha...

About the book....
Gandhi’s peaceful revolution is the focus of this picture book, part of the inspiring New York Times bestselling biography series about heroes. As a young man in India, Gandhi saw firsthand how people were treated unfairly. Refusing to accept injustice, he came up with a brilliant way to fight back through quiet, peaceful protest. He took his methods with him from South Africa back to India, where he led a nonviolent revolution that freed his country from British rule. Through his calm, steady heroism, Gandhi changed everything for India and inspired civil rights movements all over the world, proving that the smallest of us can be the most powerful.

I've read a few Children's Non-Fiction books on this particular gentleman, and while most specifically focus on his AMAZING walk to the sea (peaceful salt protest...read up on it!), this one presented a more well-rounded picture of his life and times, yet kept it accessible for the target audience.  I mean, yes...he was a man who sought peace over violence, but did you know that as a boy, we studied in London?  Did you know his course of study was the Law?  Did you know that he actually took a case to trial (though he didn't finish it)?  Betcha didn't...but now you DO and that is only the top of the iceberg in this amazing little book that will not only educate but inspire...and couldn't we all use a little more peace-not-violence talk about now? 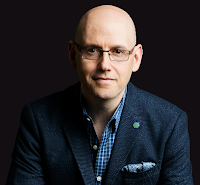 Brad Meltzer is the New York Times bestselling author of Heroes for My Son, Heroes for My Daughter, and a number of suspense novels like The House of Secrets. He is also the host of the History Channel television shows Brad Meltzer's Decoded and Brad Meltzer's Lost History. He lives in Florida with his wife and their three children.

Christopher Eliopoulos began his illustration career at Marvel Comics, and has worked on thousands of comics, including Franklin Richards: Son of a Genius, Pet Avengers, Cow Boy, and Cosmic Commandos, all of which he wrote and illustrated. He lives in New Jersey with his wife and their identical twin sons.

Special thanks to Rachel at Penguin Young Readers for the chance to bring this tour to you as well as the review copy.  (THANKS!)  For more information on this title, the series, the author, the publisher, or the tour, feel free to click through the links provided above. This title is available now via Dial Books, an imprint of Penguin Young Readers, so be on the lookout for it on a bookstore shelf or virtual retailer of your choosing.

Great covers but to me the art work for I Am Sacagawea in particular suggested a work of non-fiction for much younger children. That said, great and very diverse choices for what sounds like a wonderful series.