Today, we're joining a Great Escapes Virtual Book Tours promotion already in progress starring the FIRST in a newly released Cozy Mystery series.  It JUST celebrated its BOOK BIRTHDAY yesterday (Happy BB! *throws confetti*) and from the sound of things, it's just in time for the current reading season.  After all, it's medieval villages, secret powers, spells, and a missing prince...what more could you ask for to complete your Halloween must read list?  Exactly.  So, let's get this party started, shall we?  Today's title in the spotlight is... 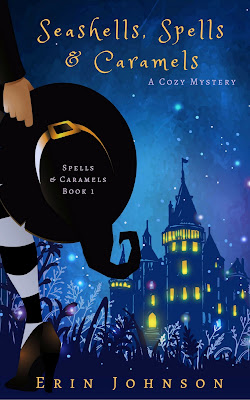 About the book...
Imogen’s spent her twenties in Seattle, saving every penny and missing every party, to follow her dream of opening her own bakery.

When that dream goes up in flames, she accepts a spot in a mysterious baking contest—one she doesn’t remember entering. She travels to a bustling, medieval village off the coast of France and discovers an enchanting world of magic and mystery, and learns that she, too, possesses powers.

Unable to so much as cast a spell, Imogen struggles to keep up with the other witches and wizards who have come from all over the magical world to the Water Kingdom's big competition. She juggles relationships with a sweet new friend, a snarky baking fire, and a brooding, handsome baker. As Imogen falls for this bewitching world, she fears she won’t master her magic in time to win the job of Royal Head Baker, and will be forced to return to the shambles of her non magical life.

It only gets worse, when a competitor drops dead in the middle of the big white baking tent, and Imogen’s the prime suspect. Now, she’ll not only have to survive the vampire and psychic judges, but also clear her name by finding the real murderer, before they strike again.

With a killer on the loose, a missing prince, and the Summer Solstice Festival fast approaching, Imogen will have to bake like her life depends on it- because it just might.

“You must be Victoria.” His voice rumbled deep from inside his chest. He wore a deep blue velvet suit, and his eyes twinkled.
“And you are?” Her tone walked the fine line between civil and icy.
The old man chuckled. “Why, I’m Ben’s grandpa, Arthur.”
I sucked in a breath and sensed Victoria stiffen next to me. The psychic diplomat grandpa she cared so much about impressing? “Of course!” Her voice went up an octave. “Silly of me, of course. So good to meet you, I’ve heard so much about you.”
“I’m sure you have.”
The silence stretched on too long, and I glanced over my shoulder. Victoria’s blue eyes blinked rapidly, and she opened and closed her mouth several times while her fiancé’s grandpa watched, his head cocked to one side, a bemused grin twisting his lips. Finally, Victoria spat out, “I’m sorry, when you walked up, I was just testing the baked goods. I wanted to make sure they were up to stand—”
The old man cut her off with a wave of his hand. “I like a person who can truly enjoy themselves now and then, you know?” He smiled at her, his eyes twinkling under his bushy brows. “I’ll leave you to your taste testing, but I’m glad to have met you and look forward to getting to know you more in the future.” He turned to go, but paused and eyed the cupcakes strewn about the table. He raised his eyes to mine. “May I?”
I smiled. “Of course, sir.” I’d only had time to place flowers on top of some of them. I searched one out and handed it to him.
He gave me a nod. I watched him wander off a few steps, peel back the wrapper, and take a bite. He then stopped and turned back to me, a question on his face. He cocked his head to the side, opened his mouth to say something, then glanced at Victoria and seemed to think better of it. He gave me another nod and wandered off toward the tables. What was that about? I watched him disappear into the crowd.
Victoria turned, her face blank with shock. “He said he wanted to get to know me better… in the future… as if… there will be a future, with me and Ben.”
I smiled. “I think you’re in.”
Her face softened, and her lips tugged into the first genuine smile I thought I’d ever seen her give. “I passed the test.” She giggled, a sound so startling from Victoria that my brows shot up under my bangs. It seemed to startle her too, because she covered her mouth, then giggled again. Even more shocking, she grabbed my hands in hers and held them tight.
“Thank you, Imogen.” I swallowed.
“For what?”
“I don’t know exactly, but I think you’ve helped me out, quite a lot in fact.” She gave my hands another little squeeze, then turned and scanned the crowd. She gave a squeal, another foreign noise coming from my boss, and waved someone over, bouncing on her heels. She turned to me, smiling. “Here he comes.”

A native of Tempe, Arizona, Erin spends her time crafting mysterious, magical, romance-filled stories that’ll hopefully make you laugh.  In between, she’s traveling, napping with her dogs, eating with her friends and family, and teaching Pilates (to allow her to eat more).

Special thanks to Lori at Great Escapes Virtual Book Tours for the chance to bring this tour to you.  (THANKS!)  For more information on this title, the author, the series, THIS TOUR, or those on the horizon, feel free to click through the links provided above.  This title is available now in ebook and tree book formats, so click on over to your favorite online retailer to snag your copy today!  Don't miss the other stops on the tour for more bookish fun from reviews to interviews and everything in between.  In the mean time, how about we have a little contest fun TIMES TWO?!

First and foremost...
...THE TOUR WIDE GIVEAWAY!
There's an AWESOME prize pack up for grabs including a tote, SIGNED books, and a Gift Card, so just CLICK HERE to throw your virtual hat in the ring.

I've been granted the opportunity to give you a...
...CHANCE TO WIN AN EBOOK OF THIS TITLE!
Exciting, am I right?  All you have to do to score your chance to win is fill out the Rafflecopter below!

I love Halloween as it isn;t where family gets together so if your family is in another state like mine is it doesn't focus on that and it is fun and I need fun as I am home bound and severely disabled that i why i hope instead of an ebook you would give a print book if i win i know there are a lot of entires so i have a snowballs chance but wanted to make sure. Yes we went to the apples orchards about 2 hrs away which was a wonderful road trip for Halloween and I also like all the trees that are changing colors during this time.

Thanks for featuring me! :) So fun to be here!

I like seeing the kids all dressed up and having fun trick or treating.