As I type this post, I'm under the weather, down a finger, and tired as all get out from a LOVELY day at work...no sarcasm intended (*smirk*)...but you know what helps turn any day right side up?  A great read...or in this case, a great TEASE featuring a potential GREAT READ that looks simply lovely.  Don't believe me?  Well then, guess I have to prove the truth of my words...no worries though, I"m prepared.  Feast your eyes on today's TLC Book Tours featured title... 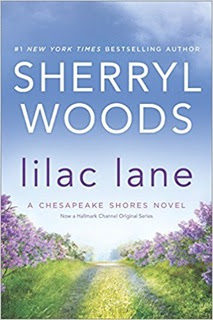 About the book...
No one writes about friends, family and home better than Sherryl Woods. Told with warmth and humor, Lilac Lane is a brand-new story in her beloved Chesapeake Shores series, one readers all over the world have waited two years to read!

At the heart of Lilac Lane is Keira Malone, who raised her three children alone after her first marriage broke apart, and who, after years of guarding her heart, finally finds love again. But that love is short-lived when her fiancé suffers a fatal heart attack. Grieving and unsure of what’s next, Keira agrees to move from Dublin to Chesapeake Shores, Maryland, to spend time with her daughter, Moira, and her new granddaughter, Kate, as well as to help her son-in-law, Luke, with his Irish pub, O’Briens.

Not wanting to live underfoot, she rents a charming cottage on Lilac Lane, replete with views of the ocean and her neighbor’s thriving garden—not to mention views of the neighbor himself. The neighbor is none other than Bryan Laramie, the brusque and moody chef at the pub, with whom Keira is constantly butting heads. But things get real when Bryan’s long-lost daughter, whom he hasn’t seen since she was a baby, shows up out of the blue. As Bryan and Keira each delve into their pasts, reopening wounds, the rest of the town is gearing up for the Fall Festival Irish Stew cook-off, and making no bones about whose side they’re on. It’s Kitchen Wars meets This is Your Life—a recipe for disaster…or a new take on love?

You won’t want to miss this epic return to Chesapeake Shores, a place we’re betting you’ll want to stay forever.

~~~ EXCERPT ~~~
“Moira, I know it’s last minute, and more of a commitment than you prefer in terms of time, but an opportunity like this might never come along again,” Megan O’Brien told her as they sat in Megan’s cramped office at her gallery on Shore Road.
Ever since she’d first seen Moira’s photographs, Megan had been an ardent champion of her work. And thanks to her con- tacts and credibility in the art world, Moira’s career had not only been established, but had taken off in ways she’d never anticipated.
Balancing the opportunities that came her way with her life with Luke and the baby had become a constant tug-of- war. Moira would have been content with life as a stay-at- home mother, but Megan had Luke’s sincere backing when it came to pushing Moira to take advantage of the opportu- nities to show her work to an increasingly expanding audi- ence across the country.
Sometimes, though, like now, she simply had to put her foot down. After a couple of rough mornings at home with Kate, perhaps she should have been eager to escape. In- stead, though, it had made her all the more determined not to fail as a mother. Megan needed to grasp that her family came first.
“Not this time,” she told Megan very firmly, then seized on what had become her latest excuse. “Megan, you know the timing is off. My mother is here—”
Megan cut her off. “Which should make the decision even easier. She’ll be available to help with Kate while you’re away.” “It’s one thing to have her sit with Kate for an afternoon  or evening. It’s entirely different to expect her to manage the baby day in and day out, while working at the pub, as well,” she said, despite evidence that her mother seemed more than capable of juggling both tasks rather well. Hadn’t she had years of experience at just that? Moira was coming to appreciate the toll of that more and more. Her mum was due a break,
not more of the same.
“She raised you and your brothers while working,” Megan reminded her as if she’d been reading Moira’s mind.
Moira recalled those days, her mum exhausted and short- tempered. No, she simply didn’t want Kate exposed to that, even if it appeared things weren’t remotely the same these days. Kiera had mellowed, just as Moira herself had.
“Talk it over with her, at least,” Megan suggested. “This show in San Francisco would open all sorts of doors for you. The gallery there has regulars from not only the West Coast, but from Hawaii, Japan, even China. It’ll be your first inter- national exposure.”
“I started in Ireland,” Moira reminded her, “and there were European collectors when I did my show in New York.”
Megan shrugged those reminders off as if they were of no consequence. “You know what I’m saying, Moira. This is another opportunity to expand your audience that simply shouldn’t be ignored. My role is to give you the best profes- sional advice I can, and I’m telling you this is an invaluable invitation. Sit down with your mother and Luke. I’ll come back to the pub with you right now. We can explain the sig- nificance of this to them together. You know Luke will do whatever it takes to support you, and I’m sure your mother will jump on board.”
“No way am I subjecting the two of them to you,” Moira said. “You’re as much of a bulldozer as your husband, Megan O’Brien.”
Megan looked pleased by the comment. “Living with Mick all these years was bound to rub off. We both do enjoy get- ting our own way.”
“It wasn’t meant as a compliment.”
Megan laughed. “I know, but I’ll take it as one just the same. So you’ll talk to your mother and Luke and let me know tomorrow?”
“As if there was ever any doubt,” Moira muttered, then tempered her sarcasm with a more appropriate note of grati- tude. “I do appreciate all you’ve done for me.”
“Even when I’m being pushy and demanding?”
“Even then.” 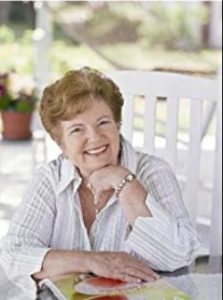 With her roots firmly planted in the South, Sherryl Woods has written many of her more than 100 books in that distinctive setting, whether in her home state of Virginia, her adopted state, Florida, or her much-adored South Carolina. Sherryl is best known for her ability to creating endearing small town communities and families. She is the New York Times and USA Today bestselling author of over 75 romances for Silhouette Desire and Special Edition

Special thanks to Lisa at TLC Book Tours for the chance to bring this promotion to you and the the Harlequin MIRA team for the wonderful excerpt to share with all of you.  (THANKS!)  For more information on this title, the author, the series, the publisher, THIS TOUR, or those on the horizon, feel free to click through the links provided above.  This title is set to celebrate its BOOK BIRTHDAY October 17th, 2017 (as of this post), so mark your calendar or pre-order your copy today!  Be sure to check out the OTHER STOPS ON THE TOUR for more exciting excerpts AND stay tuned for the review portion, coming soon to a blog (including mine!) near you!